The Musket Wars were a series of as many as 3,000 battles and raids fought throughout New Zealand by Maori against Maori between 1807 and 1837, after Māori first obtained muskets and then engaged in an intertribal arms race in order to gain territory or seek revenge for past defeats. Warfare was endemic in Maori society.

Between 20.000 and 40,000 Maori were killed and tens of thousands of Maori were enslaved and many were eaten.

Pre colonisation age expectancy of Maori was in the 30’s with tribal warfare being a predominant killer along with digestion diseases.

Pre colonial New Zealand is sometimes represented as an idylic period and colonialism is blamed for Maori woes. On the contrary, Colonisation may have saved many Maori lives.

Great, grandfather, Edwin Gordon Blackmore joined the Taranaki Rifle Volunteer Corps, during the Maori War 1863-1864, and was present in reserve at the action at Poutoko on the 2nd October 1863, and present at the storming and capture of the rebel Maori strongholds of Ahuahu and Kaitake in March 1864. For these services he received the New Zealand Medal.

South of New Plymouth towards the end of 1863 the chief activity of the Taranaki was the construction of a strongly entrenched position at Kaitake, on a north-western spur of the Patua Range; the pa was on the bold skyline of this ridge as seen from the main road at Oakura. The distance from the Oakura River mouth to the pa was about three miles. The local chief and engineer of this fortification was Patara Raukatauri, of the Taranaki Tribe; he afterwards gained celebrity as one of the emissaries or prophets sent out to Te Ua to preach the fanatic gospel of the Pai-marire among the East Coast tribes. (Patara, however, was a man of far milder character than his fellow-prophets, and did not enter into the deeds of savagery of which Kereopa was guilty.) Kaitake was a well-planned stronghold, situated in an excellent position for defence, on a steep, high ridge, with a frontal stockade covering the terminal of the spur, and two parapeted redoubts, one in rear of the other, on the heights. There were also skilfully arranged rifle-pits flanking the direct approach to the pas. In December, 1863, Colonel Warre shelled the place with the Armstrong field-guns, but the final operations were deferred until the following year. The Government was now bringing in military settlers, many of them from Victoria, and the force in the province amounted to about two thousand men, including a thousand Regular troops.

Kaitake was stormed and captured by the troops on the 25th March, 1864. A force of 420 of the 57th, 70th, and Volunteers and Militia, with four guns, under Colonel Warre, moved out from New Plymouth to the base of the range. The guns were placed in position about 1,500 yards from the right of the Maori rifle-pits, and made such accurate practice that most of the defenders were driven out of those portions of the works. In the meantime a party of eighty Military Settlers, under Captain Corbett, who had left their redoubt at Oakura about 1 a.m., with great labour worked their way to the base of the spur on which the rifle-pits had been made, and took the positions in reverse. They were nine hours advancing two miles and a half through the bush. At 10.30 a.m. the guns ceased firing. The main body of the troops advanced to within 800 yards of the works, while the Volunteers and Military Settlers ascended the spur and carried in succession the rifle-pits and the pas, pouring a reverse fire into the trenches behind the line of palisading. The Maoris held these trenches until a portion of the main body had ascended a ridge on their extreme left. Both flanks having been turned, the Maoris retired through the bush in their rear. A redoubt for a hundred men was immediately constructed on the site of the uppermost pa. The enemy’s works were gradually destroyed, the bush in the vicinity was cut down, and a practicable road was made to the position. A party of rejoicing settlers, including a lady, drank champagne in the captured stronghold the day after its capture. However, four days after the storming of the position the Maoris laid an ambuscade within 150 yards of the redoubt, and killed one soldier and wounded another. 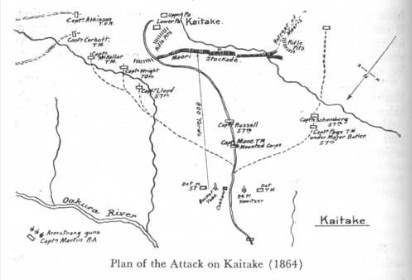 "Struth it's Blackmores" records interesting history and stories about my ancestors for the benefit of my children, their descendants and other extended family. "A Spitfire over Darwin" documents the story of a distant relative William Torrens Hinds who came to Australia with British RAF 54 Squadron and was killed in action over Darwin in 1943. View all posts by Greg Blackmore